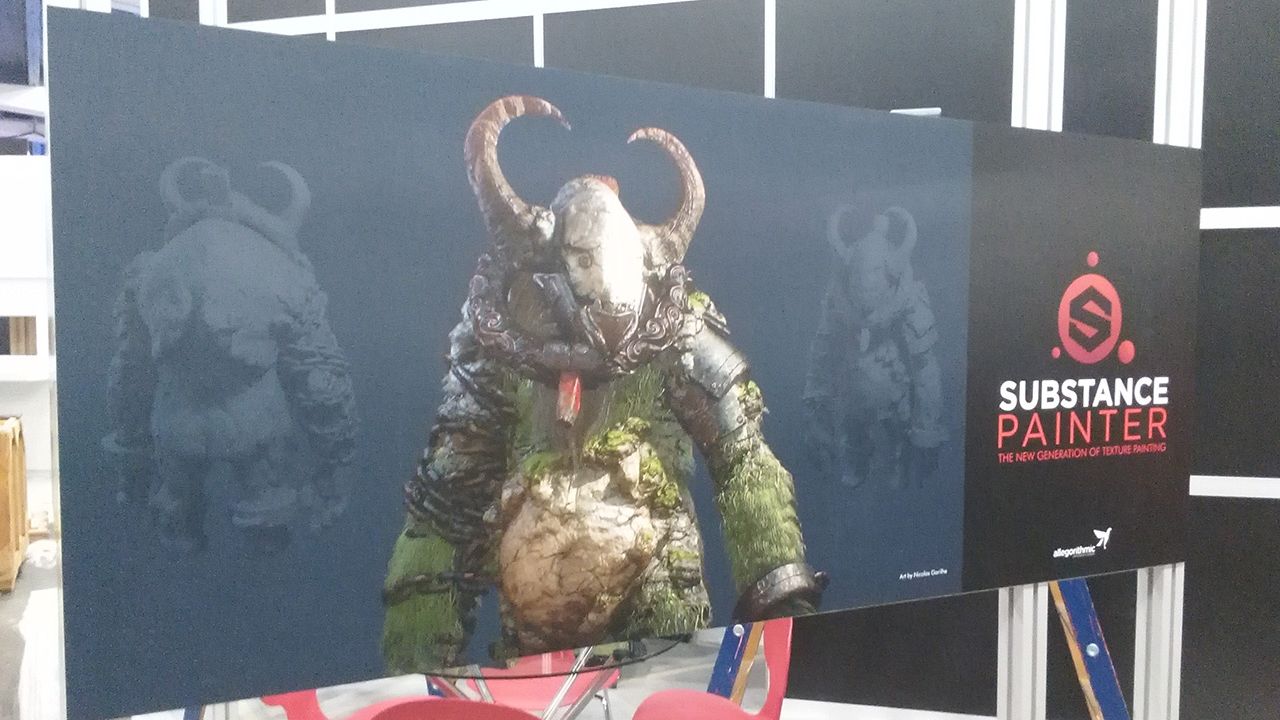 From GDC to VR prototype and updates on EXIL

I have been more busy that I would have thought in the first place. I’m a bit sad that my blog is so slow currently, I always enjoyed posting my current progress. Anyway, this post today will present a bit what I have done during this year. Hopefully I won’t have to do the same next year. 🙂

During the beginning of 2015 I have worked on my UE4 game project named EXIL. I wanted to do a trailer that would present the introduction of the game. It took a lot of time, much more that I would have expected, around 4 month to complete (by working alone on it). I got help for the music track (thanks again to Olivier Zuccaro AKA __Max__ ) but the rest was made by me. I reused my rigging toolset developed during my school project and animated by hand the whole sequence. You can see some individual examples but also watch the trailer if you want. Note that everything was textured with Substance Designer (and a bit of Substance Painter).

It was fun to create and try different kind of FX, especially shaders and particles.The growing of the horns was also very interesting to try out. At this time I didn’t know zBrush could be used to sculpt morph targets, so I used the sculpting tools in Maya to create two morph targets. One version with horns half size, and an other version with the horns totally flat (I smoothed the geometry). I then baked two sets of normal maps that I blend together based on the current morph target values. The blending of the shader and the morph targets was done either in the animation sequence or via Matinee this way I get a clean control on the horn transition.

I had a lot of troubles with Matinee because of camera refresh bugs, the lack of animation blending (which forced me to do more work in Maya itself) and other various instability issues. Compared to UDK, Matinee in UE4 is very unpleasant to work with. Especially when you have a weak GPU like I had. And I’m not even mentioning the world space base locations which make moving assets a nightmare as you have to redo all the keyframes.

Overall, by looking at the trailer months later, I’m not really satisfied with the end result as it stills feels too low in quality (my favorite part is still the appearance of the logo… which says a lot).
Hopefully that’s something I will be able to improve one day. As for now, I’m not working on EXIL as I decided to put the project on the side until I feel motivated enough to get back on it. After the trailer a worked a bit more to showcase some gameplay sequences, for example :

Thanks to my work at Allegorithmic, I was able to participate to the GDC 2015 and perform some demonstration of our tools on the Allegorithmic’s booth. It was an interesting experience, first time flying to the USA (and visiting San Francisco). I also had the opportunity to meet a lot of people. I wish I had more time to visit a bit more the exposition floor or even attend some conferences. Anyway, that was a great occasion.

Just above you can see the booth being setup and also other booth more impressive. Unity and Unreal Engine were huge (with VIP section and second floor). We also did a meetup which was the occasion to have user presentations. One in particular was from Michael Pavlovich from Certain Affinity about their work with Substance Designer during the HD Remaster of Halo 2 Anniversary. They also talked about their pipeline during conferences at the GDC (in the video below).

And of course many more things during this trip…

In the middle of all the things that I have done there was playing a bit with VR. To be more exact : developing for VR.

I bought an Oculus DK2 to work with the UE4 and with my work I also had the chance to try out the HTC Vive by Valve. Both experience are interesting, the Vive being the best one for the moment thanks to its hand controllers and the fact that you can walk in a large area, making the immersion in VR even more pleasant. I tried to convert some projects to VR, like EXIL only to discover what people are already telling everywhere : designing for VR is different than regular games.

The set of constraints is really not the same. Especially regarding user interfaces, interactions and movements. The last being the most difficult one to work around from my own experience. The only problem I see for the moment is that even for developers the lack of resources and tutorials is really hard to overcome, making the design of experiences for VR hard to do. Hopefully this will become easier with time.

I tried different prototypes during my tests : FPS, Cockpit view from a spaceship (with ability to fly arround) and of course Third-Person platform with EXIL. Some took days, some took month of my time. After the work on the trailer for EXIL, I wanted to refresh my mind so VR was a good opportunity.

I also had the chance to be featured in the magazine 3D Artist of June 2015. They wanted to showcase a list of the best tools available for artists, my "froTools" toolset for Maya being in the list. 🙂

I have started to stream again on Twitch for my current work, don’t hesitate to follow if you don’t want to miss the next stream ! My channel is over here : http://www.twitch.tv/froyok . I also do local recording, so I’m now able to upload in a much higher quality my streams. I also posted on youtube some texturing I did recently in case you missed them :

I’m working on new personal project. This is not a game but more like a technical showcase. I won’t go into details yet. I have been working on it during my free time since the beginning of October. Hopefully I will be able to share a bit more about it soon.